Pella City Council considered options for building a new performing arts center versus upgrading the current community center at its meeting on Tuesday. This new assessment by Short Elliott Hendrickson, Inc. included a focus group with elected officials and members of the Community Services Department, as well as interviews with Pella police, fire and ambulance leaders. No formal action was taken at this week’s meeting.

The concept would end up building a new performing arts center with a 500- or 1,000-seat auditorium, on-site parking between 16 and 70 spaces (and additional public spaces for the right-of-way), and space for programs expanded Pella community art center and new town council chambers. The projected cost of a new facility would be between $18.6 million and $22.8 million, and the discussion focused on a high-level overview of what could be, with more details available at to come up. 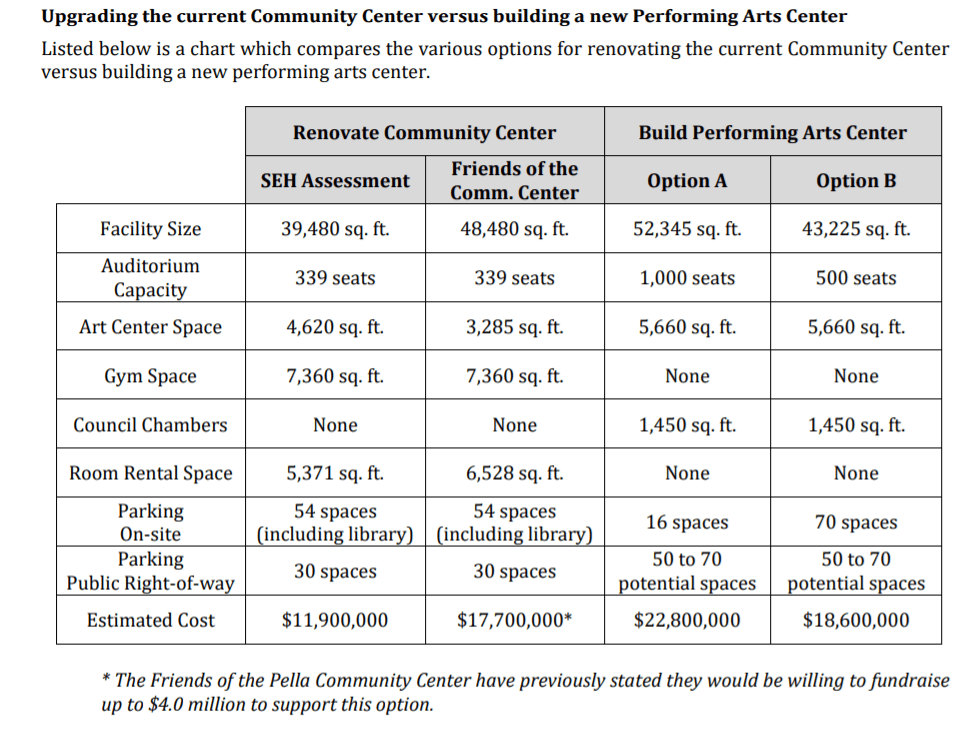 If the Pella Community Center project is staggered or scheduled further than the next few years – particularly with the council also considering a proposal for an indoor leisure facility at Pella Sports Park, the cost to meet current service needs would be approximately $750,000 for upgrades to the current elevator, restroom upgrades and ceiling updates, and closer to $5.2 million for larger upgrades to the current facility with no expansion considered by the Friends of the Pella Community Center, which could potentially add 20 years of service to the structure without additions to the building.

One of the main concerns raised during the session and assessment is future space requirements for public safety officials and first responders – no action will be taken without further consultation with these leaders, according to the City Administrator Mike Nardini.

Following this week’s meeting, strategy working sessions are scheduled to begin at 5:30 p.m. on Tuesday, January 25 and Wednesday, January 26 in the Pella City Council Chambers at 614 Main Street for further discussion. on the goals of the current board through the end of their term in December 2023, which includes long-term departmental goals, major projects, etc. Pella City Council intends to complete its long-term facility plans in March, following budget workshops in February.