Hearing loss is not a barrier to community service

Hu Zhenzhou’s commitment to community service has made him a household name in his neighborhood.

His true identity, however, remains unknown as he appears as faceless. dabai who is always dressed in a head-to-toe protective suit in front of the neighbors. As a result, he is just a nice young man who lives in Building #8 in their eyes. Nevertheless, he is happy.

Volunteering allows this 31-year-old with hearing loss to be widely understood, accepted and treated fairly.

“No one knows about my hearing loss and no one cares. Right now I’m just a volunteer helping others and I’m proud of that,” he said.

During the Shanghai lockdown, there has been an increase in volunteering in the community. Hu also came out of a sense of obligation. But it wasn’t easy.

On April 8, Tongkangyuan in Pudong New Area, where he lives, began recruiting volunteers. He had fought the urge to enroll all day.

“I have hearing problems, which can lead to miscommunication. I was afraid of being ineffective and causing trouble,” Hu explained.

But after some hesitation, he realized he wanted to contribute to his community. He seemed perfectly suited for the job. He already had five years of experience in a charity store and was an expert in warehousing, sorting and distribution. 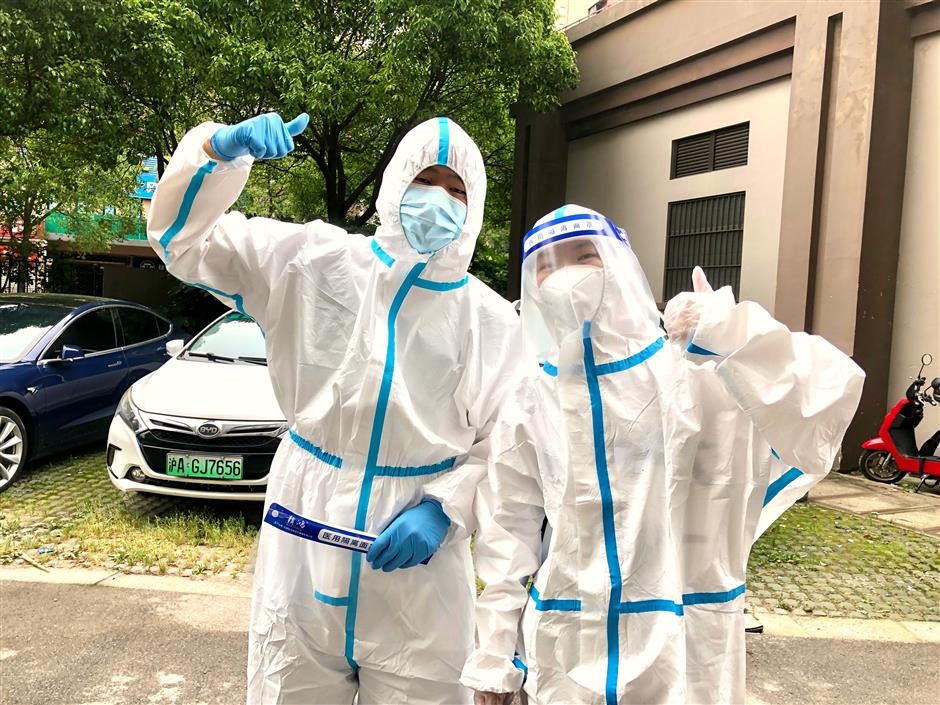 Volunteers, and an associate nicknamed “King”, welcomed him with open arms.

“They went above and beyond to explain the do’s and don’ts to me,” he said.

He works four days a week for three to four hours straight. Despite his hearing loss, he continued to work without incident.

As his nickname “gorilla” suggests, he is heavily built and quite tall. As a result, he is always eager to take on heavy duties such as transporting delivery packages and disinfecting public places.

Two to three times a week, he carries 20 liters of disinfectant spray on his back and disinfects the hallways from the 32nd floor to the ground floor. With his heavy protective suit, he quickly becomes drenched in sweat. As his mask becomes hazy, King is always by his side to guide him.

They work in a comrade’s silence, he says.

“During nucleic acid testing, I’m in charge of scanning people’s QR codes and she’s in charge of recording their information,” he said, adding that King had learned sign language especially for him because protective gloves interfered with communication.

King can now say “hello”, “beginning” and “end”, among other simple expressions, in sign language. “It’s a benefit of volunteering. I learned a new language,” she said.

Hu was greatly inspired by her positive attitude. “I didn’t expect this to be an opportunity to promote sign language,” he said.

Hu lost his hearing as a child due to medication. He started working for the local charity store chain, Buy42, which employs people with disabilities, five years ago. He is now a trainee store manager on Jiangning Road.

Many of his colleagues have become involved in community service. This may seem insignificant, but raising awareness about people with disabilities is essential.

As he admitted, his hearing loss caused a lot of inconvenience. However, as smartphones become more popular, the situation is improving.

“I believe that we are more and more accepted by society. Customers show less misunderstandings at work. I know that the authorities have done a lot to remove language barriers, such as the use of sign language interpreters for newscasts. However, there is still a long way to go in creating a disability-friendly community,” he said.