[Editor’s Note: This month’s Community Voices column is by Brian Hurley. Brian runs daily on the paths, roads, and trails of Fayetteville, Arkansas, where he lives with his wife and sons. He occasionally leaves town to explore the state by bike, canoe, train, and foot, and documents these trips in articles and on Instagram. In this column each month, we showcase the work of a writer, visual artist, or other creative type from within our global trail running and ultrarunning community. Our goal is to tell stories about our sport and wild lands in creative and innovative ways. Submit your work for consideration!]

What message could be so important that you would need to carry it up that hill, I was wondering. I walked straight up the old roadbed that was once the mail route between the small towns of Athens and Big Fork in the Ouachita Mountains of Arkansas.

A view of the Ouachita National Forest. All photos: Brian Hurley

If I remember correctly, there are only two switchbacks on the course. The 16 climbs aren’t long, but they are steep, with over 7,000 feet of climbing over 26.8 miles. It’s technical enough that the descents are barely passable. The only flat sections are the beds of the many streams you cross. Arkansas in January can easily be 70 degrees Fahrenheit and sunny, but this year it was closer to 30 degrees and pouring rain. Still, the trail—which had turned into a creek itself—was full of runners testing themselves on one of the toughest and most scenic courses in the area.

the Athens Marathon Big Fork Trail is a small event in a remote area. This part of the Ouachitas seems to attract people trying to escape from society. Cellular reception is non-existent. There are septic tanks and burn piles instead of sewer lines and garbage collection. Signs advertising the sale of unpasteurized milk are nailed to fences along the road. 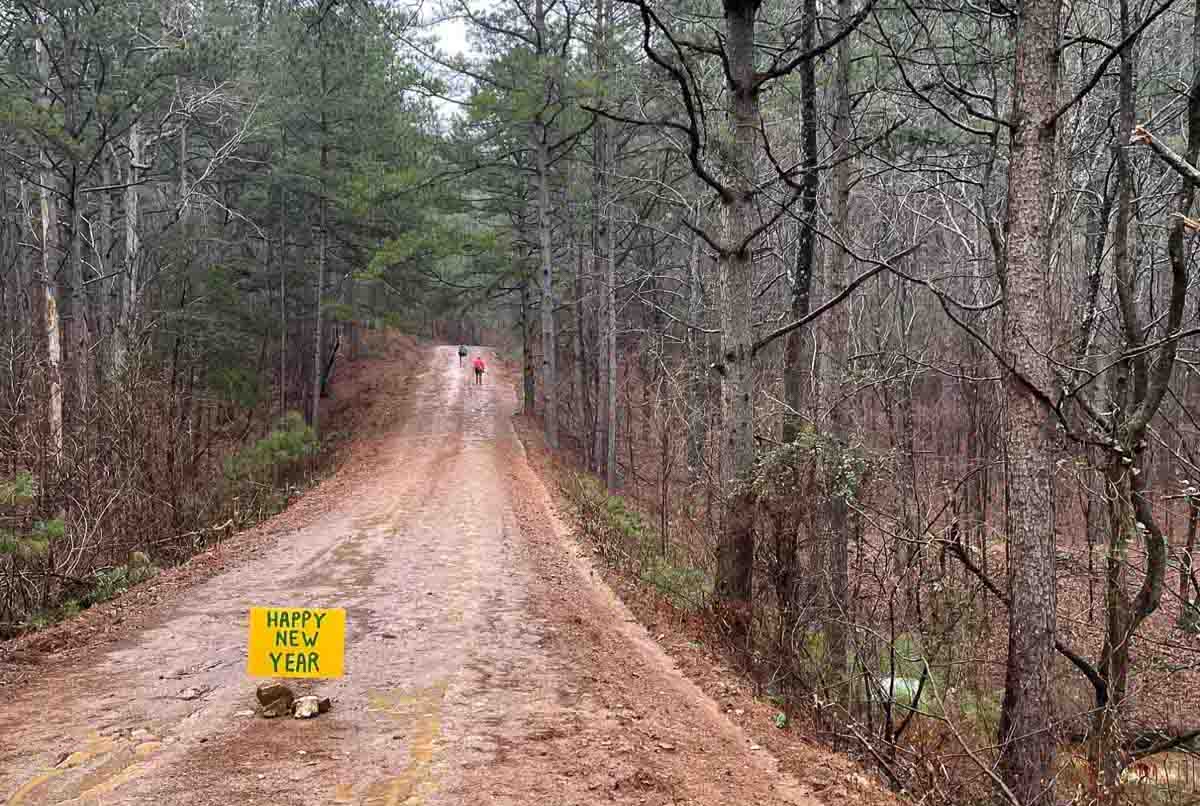 david samuel, a United States Forest Service forester, started running in 1999. He has worked in the field on and off since the 1960s and was instrumental in creating this trail system in the 1980s. In 1999 , there were nine participants – including David, who has run to some extent every year, and this time covered a rugged 7.2 miles at 78. To get a spot this year, I had to be ready to register as soon as registration opened. . It was full within minutes.

Part of what draws people to the Athens Big Fork Trail Marathon is the challenge of the course. This is the most technical trail with the greatest drop. I tried it twice before and came away beaten. Once I got lost, which is hard to do on this course. Next time I couldn’t handle the hills. My practice on flat pavement wasn’t enough, and I found myself stranded at mile 16, wondering how I was going to get back to the car. This year I tried to get it right and looked for the terrain that most closely resembled the course. All over the state, people are doing this: running the steepest, rockiest hills they can find, doing endless reps on a local 50-foot ridge, creating Strava maps that look like phone cords curly. This tiny, free race can become the focus of your whole year. 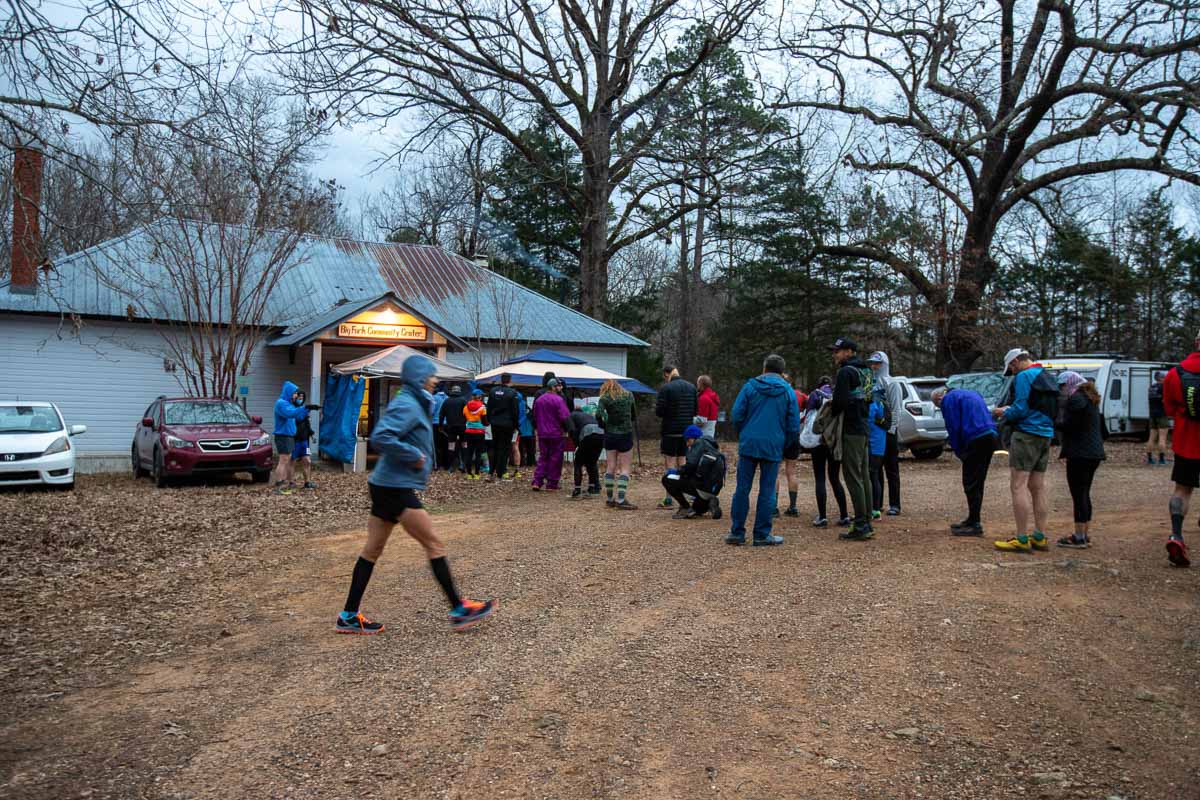 On race weekend, the masses converge at Big Fork; 240 runners is “the mass” compared to the town of Big Fork, which has 179 residents. Other than the Big Fork Mall, a small store I’ve never seen open, the only public building is the community center. It appears to have been a former schoolhouse, and now serves as a gathering place for the town and the lending library – the latter heavy on James Patterson and Jude Deveraux. This building is also the race headquarters, the main source of accommodation for runners who camp outside of it, and pre-race washrooms. For years, residents have made sure the space is clean and the flat-bellied stove is on the night before to keep the building warm.

There is no official fee to run the race. Runners donate cash, which gives you a race number, food and (if desired) alcohol at aid stations, and post-race snacks. Other services such as the Polk County Sheriff’s Escort on the first mile of the freeway and HAM radio communication through the Ouachita Amateur Radio Association is all offered free of charge.

This year my wife Ana Hurley, who was participating in this year’s race as his first marathon, and I camped in the nearby forest and arrived at the community center just after dawn. After a quick check-in and a porta-potty stop, we lined up with the others on the two-lane highway. There was no traffic to block. Stacey Razor, race director since 2018, gave the instructions. Follow the white flames. There is no return shuttle so you really can’t give up. But if something happens, stay put. Log out when you’re done so no one thinks you’re sticking around. Then we left. 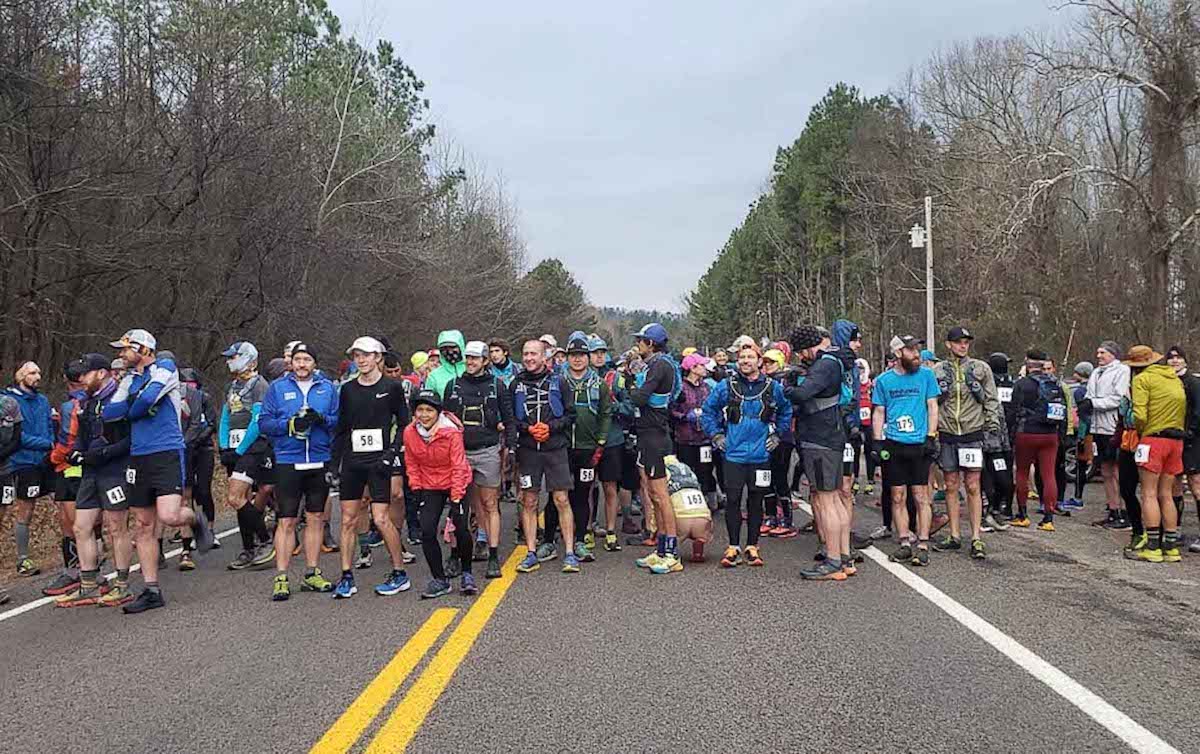 Runners on the starting line at Big Fork.

Running down the highway, the sheriff warned the few oncoming cars of our presence by driving halfway down the double yellow with his arm outstretched to flag them down before briefly explaining what was going on. First, a bend on a dirt road. Then, another bend on the trail.

The first ascent of Missouri Mountain is passable enough to make you think it might not be so bad. I followed with a few other runners: Chadcomplete the full marathon, and Eva, a fast high school runner, was doing the 17-mile “fun run.” Trying to stick to my patience plan, I figured it was okay to be behind on the climb. The first descent is the smoothest of the course, and I was able to catch up. We all went through the aid station without a break. It had been dry enough for the past few weeks that for the first time in my run I was able to cross the Little Missouri River, which is just a stream at this point near its headwaters, with my feet still dry. .

Rock hopping across streams would become pointless as the downpour started soon after and didn’t stop the entire run. The other runners and I played cat and mouse over the next mountains, where I would fall back on the ups and then catch up on the downs. We also started catching up with some newbies who gave words of encouragement. 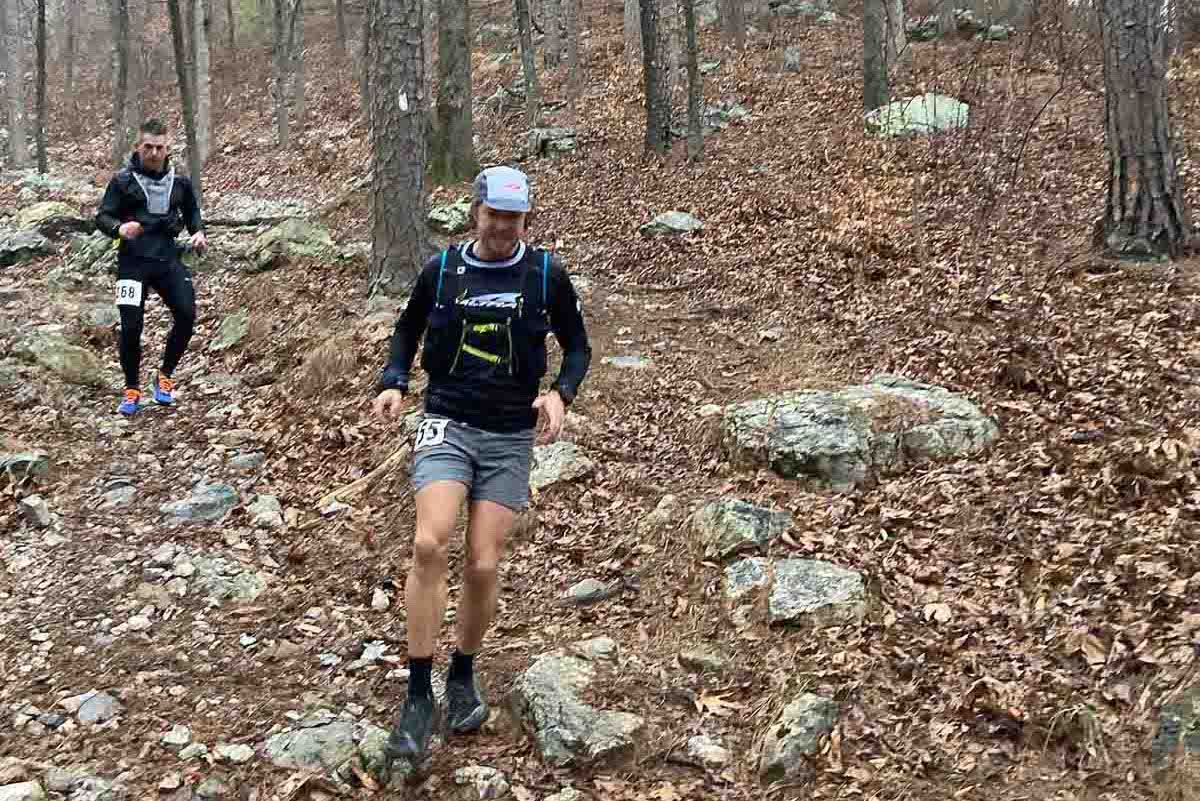 The trails are wet, technical and rocky, sort of the toughest of both worlds between US East and West Coast races.

At Blaylock Creek, Evan turned around. Since there are few switchbacks or views behind, I didn’t know where I was relative to the others, but I kept going easy on the ups and trying to stumble quickly on the downs. After crashing on the last descent before the flip, I jumped onto the road. Jim, a 65-year-old beginner who was running the marathon for the fourth or fifth time, told me the fireball shots at the aid station were amazing. I was tempted, but I succeeded. Once back, I could see that I was a few minutes ahead, but anything could happen.

I continued with the same pattern of ups and downs, but on the way back I was fueled by seeing the other runners. I ran into Ana, who was much more advanced than I expected. I thought maybe she tried too hard and would pay later (she wouldn’t), and wondered if she’d take a dose of Fireball when it came time for the reversal (she would ). The rain and cold continued. My hands stopped working. High fives and words of encouragement replaced gels as fuel because my fingers couldn’t operate the zipper on the pocket where I kept them. 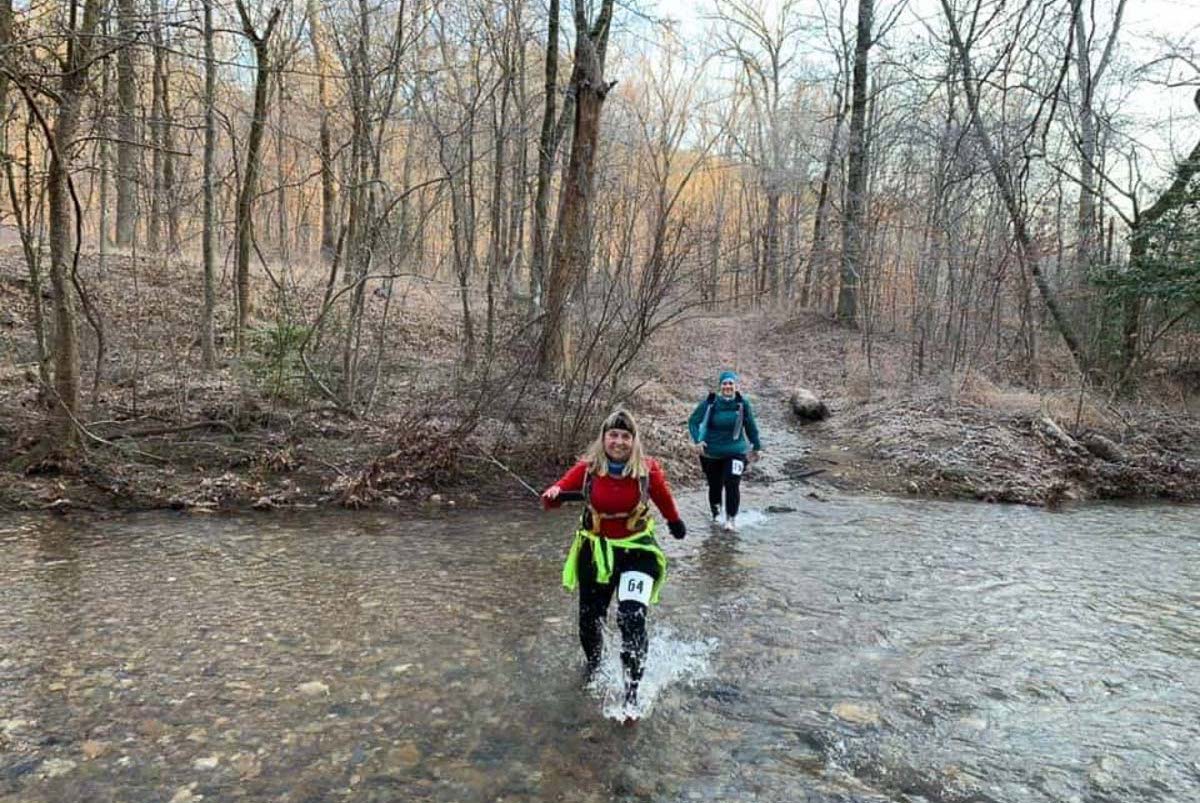 While some years the race temperature is 70 degrees Fahrenheit, last year it was near freezing and it rained all the time.

The rain fell harder and the trails turned into streams. Just when my feet and legs were getting surprisingly cold and worried, I returned to Missouri Mountain for the final climb and descent before hitting the road again. The promise of smooth surfaces, a gradual descent and the view from the end made it bearable.

Trail, then dirt road, then highway. Finally, I could see the line of cars along the side of the road, which meant it was almost over. Returning to the community center, frozen and dizzy, I was greeted by a crowd that knew that for the past few years I had lost myself physically or emotionally, and was happy for me that it was happening this time. After a brief account of the race, I returned to my car and, using my last remaining dexterity, managed to turn the key. It took a full 15 minutes in front of the heater before my fingers were warm enough to get out of my vest and about 45 minutes more until I could put on some dry clothes and return to the finish. 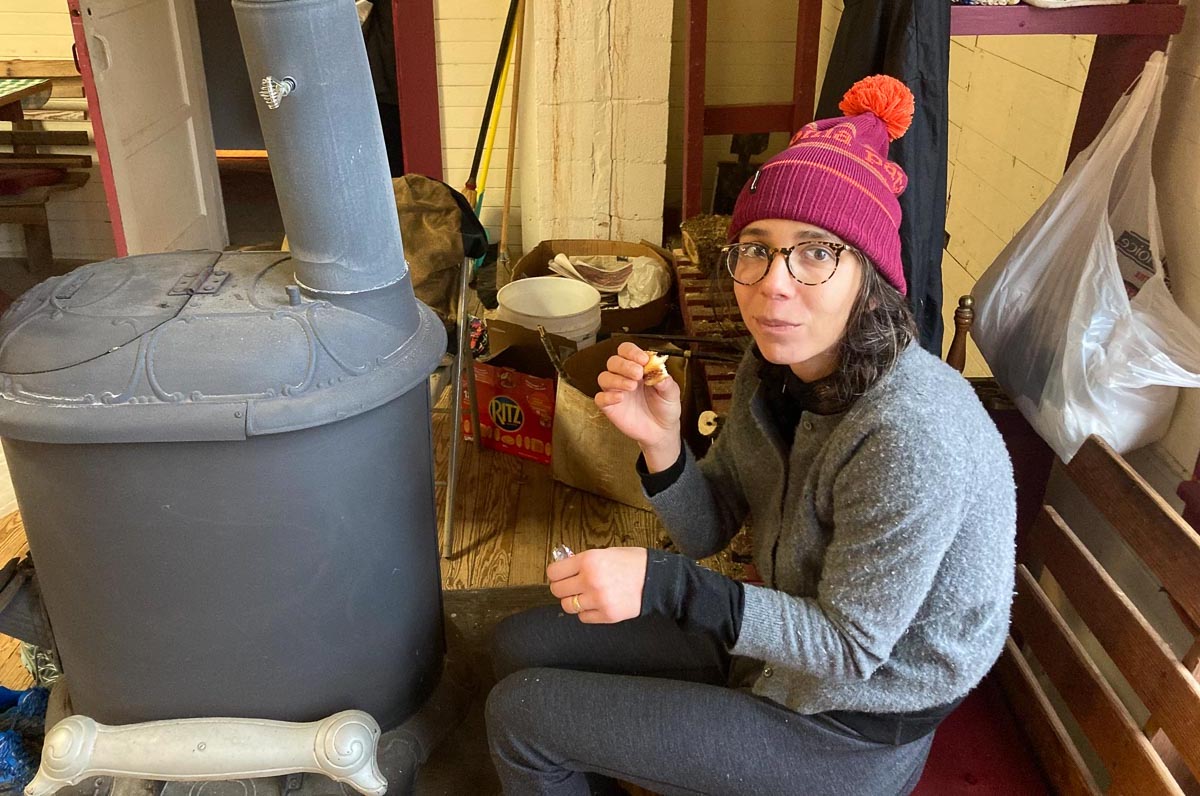 Ana Hurley warms up by the community center woodstove after the race.

One by one, the runners entered. They shared their stories and made their way to the community center, where they got food and huddled around the stove, and place to recover and celebrate after the race. For years, locals have provided runners with soup, baked goods and grilled deer meat. Recently, Stacey had added food and sweatshirts to buy. For some, this threatened the no-frills spirit of the event, but the extra money was used to replace the centre’s plumbing and buy new equipment for the HAM radio operators.

Ana finished a close second in the women’s race, then changed and sat as close to the stove as possible. We ate, drank and talked: about the cold, the mud and the falls and finding common ground in the difficult terrain. The trail, which has long been the link between the inhabitants of two small communities, now connects many others. 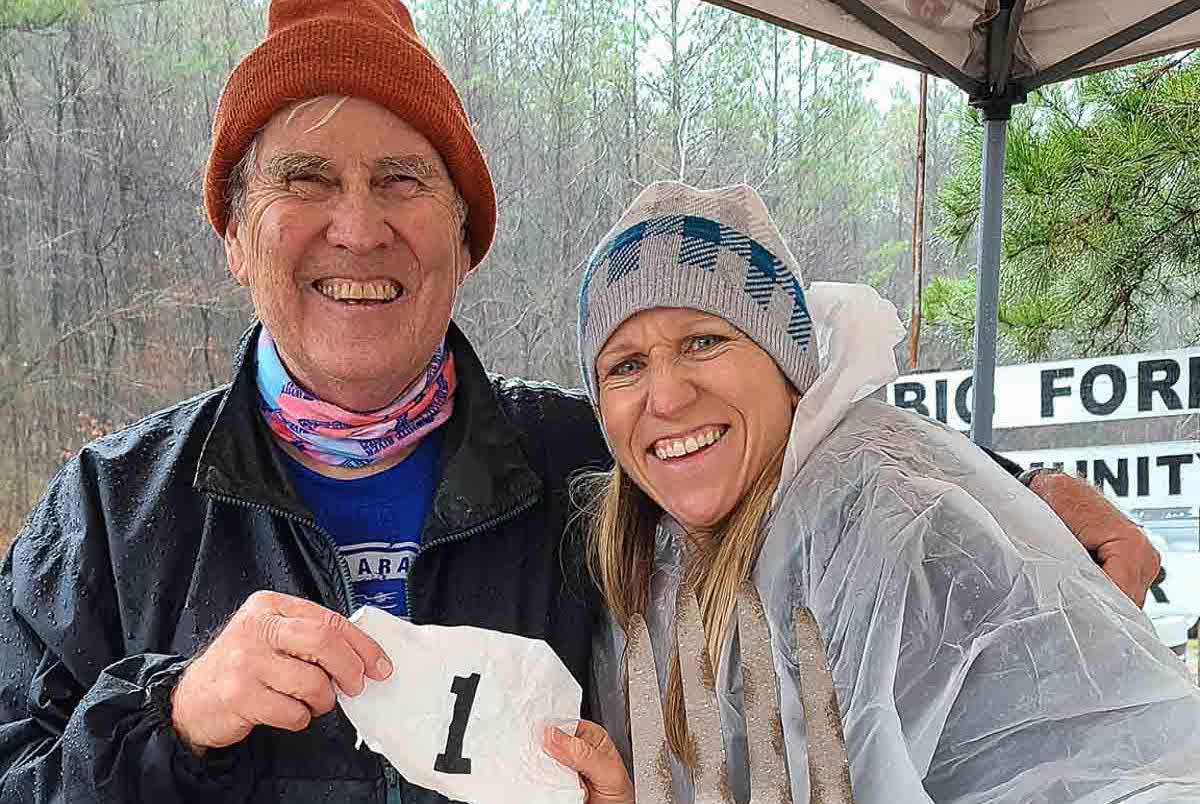